The two days following our last update, from the tiny village of Rugat, were hairpin-filled and rather strenuous although we did pass through (yet more) wonderful countryside.  One thing about hills is that they do give you splendid views when you reach the top!  We passed a weary looking lone cyclist as we were skirting around one of the huge reservoirs in the area, and were glad of the fact that we have each other to share both the weight of our equipment and supplies and for companionship – it must be pretty arduous going it alone.   Our daily water requirements are starting to exceed the capacity of the bottles we carry on our bikes as we get further south, so it’s handy that just about any hamlet or village in Spain seems to have a water fountain where you can refill with icy-cold agua.  The water of from Castell de Castells could have done with being a little less icy-cold, however, as the municipal campsite turned out to have a locked shower block and the requirement that you register in advance with the local authority in order to procure a key!   Having experience of the efficiency of local authorities in the UK and no reason to think things would be any different in Spain, we appealed to the local lady in the village who acted as guardian of the site.   She, however, frankly couldn´t be bothered to walk up the hill to the campsite in the dusk to open the facilities – hence cold showers among the pine trees!   It was a lovely spot, though, set above the village and covered with thyme and rosemary (some of which we used to make our tea).
The next day´s landscape was dominated by almond and olive groves, as well as huge herds of agile goats, several standing up on their hind legs and pawing (hoofing?) at the branches to get at the tastier leaves!   We reached Finestrat and the comfortable confines of the Orange House at about lunchtime, and quickly settled ourselves inside to escape the hottest part of the day and were well fed and watered by Sam and Rich, our hosts for the next few days.  We had a really excellent time and a well-needed rest at the Orange House with Anna´s sister, her fiance and two friends, spending some time scrambling up the Puig Campana – a large chunk of rock (ie mountain) overlooking Finestrat.   Although Anna didn´t make it to the top, Luke carried on with the rest of the gang (cavers are a determined bunch whether ascending or descending) despite the fact that he was wearing sandals!   So, it was with some difficulty that we tore ourselves away from this very hospitable little corner of Spain, and hit the road again on Tuesday 28th.

We were particularly glad to be on bikes rather than in a four wheeled vehicle for the next few days, as it made negotiating our way through villages and towns much easier!   Buildings somehow cling to precipitous slopes and alleyways and even major thoroughfares seem more appropriate for a slightly podgy donkey than a car.   It´s also much easier to stop and hop up onto the pavement if you´re on a bike or scoot up a one-way street without being detected.   We were tempted to stop in Xixona to try the local culinary speciality and visit the town museum dedicated to it.   Turron is a sort of nougat, usually full of almonds, although it comes in a plethora of different types and flavours as we found out.   We have discovered over the last few months that anything with the potential to go gooey at 30 degrees C is not a good thing to fill your panniers with, though, so reluctantly we stuck to the usual lunch fodder of bread and cheese.
We gave ourselves an easier time with regard to hills on Tuesday and Wednesday, making use of a canal tow-path and then several sections of the Vias Verdes, once again.   The Vias are sometimes a little hard to find, although difficult to stray from once you are on them, and do have the occasional surprise, like flood-lit tunnels where the cable connecting light to switch is juuuuuuust not long enough…making the whole set-up sadly a waste of an afternoon for a local electrician.

Towards the end of last week we reached Murcia province, which was parched and dusty at the end of summer, the roads busy with clanking lorries ferrying all the fresh produce from the region to various parts of Europe.   If you buy some Spanish olive oil anytime soon, we think there´s a good chance we will have cycled past the olives from which it was pressed!   Apparently, there are 1.5 million trees in the province of Jaen alone and we can believe it – eye-spy starts to become a little monotonous once you have used up O for “Olive”, O for “Orchard”, O for “Oh, look, another olive”…   On our way from Bullas, the end of the Via Verde, to Caravaca de la Cruz, home to a “lignum crucis” apparent in 1232 and now home to coachloads of pilgrims, we did see a hoopoe and some squabbling red squirrels, which somewhat lessened the olive monotony.   Resisting the urge (not very strong) to wait for a few days and watch Pepin LLiria, local matador hero, in action against an unfortunate bull in the Plaza de Toros, we pushed on into the hot afternoon, finally finding a straight flat road and a cool breeze on an amazing upland plateau several hours later.   The landscape is certainly variable on a daily basis, even at bike speeds, and we found the prairie-like expanse dotted with huge, single trees quite a refreshing change!  You would think you were in Mongolia up there, rather than Spain, and I half expected a man on horseback to ride up and try and sell me the bike he had pinched from a cycle tourist some weeks back!! 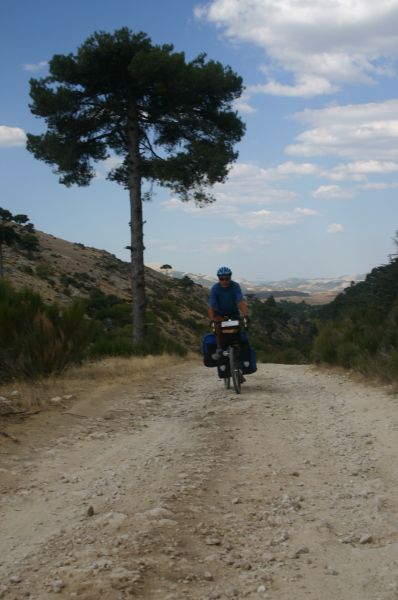 The next 100km stretch led through the Sierra de Cazorla, a mountain range reaching about 1500m, and we hoped to cover it in one long day.  The road, however, had other ideas, and after a fairly gruelling climb on good tarmac, it disintegrated into first a rough track, and then something which could only be called a footpath…  80km in, with the light fading fast, we set up camp in a clearing in the forest.  There was absolutely no habitation within sight and no sound all night except for stags roaring in the valley below (wish we had a tape recorder!) and an owl which alighted in our glade and hooted for a while around 3am.  We returned to civilisation the next day, swooshing down through olive groves to Cazorla on the edge of the national park, and then on to Jodar.  This is a campsite-free bit of Spain it seems, so we stayed in the town´s only pension, run by two little old ladies, who were incredibly kind and very intrigued by our bikes and our journey.  They kept telling us to eat more churros to make sure we didn´t get too thin and forced two big bottles of ice-cold water on us as we left on Sunday morning.  The room, immaculate and overlooking the square and church, was 20 Euros, so hardly more than the pricier campsites. 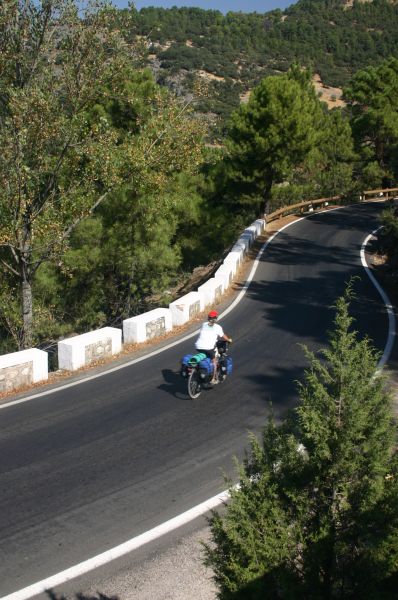 The next day we had a long day through more rolling agricultural landscapes and past yet more olive groves.  9km outside Granada, when we were very tired, a particularly nasty plant had strewn its seeds on the road and both our back tyres simultaneously punctured.  Typical.  So we stopped and replaced the inners and finally arrived at 8.30pm just as it was getting dark.  We installed ourselves in the Youth Hostel which is very modern and clean and quite central, and had the whole of the first morning exploring
the Alhambra.  We turned up at 8.30am to avoid the crowds and had a really lovely first few hours when the light was still soft and the temperature fairly cool.  It´s a really stunning place, as we had imagined, but a shame that the rooms and courtyards themselves are so small and easily filled with tour groups because you don´t really get a chance to just sit and contemplate the architecture and decoration.  There are some quiet corners though, especially in the gardens, and it really is very beautiful and calming.

After an extended stay while Luke recovered from a mild stomach bug we embarked on the final leg of the European journey – to Gibraltar.  A long day from Granada saw us crossing the Vega, a fertile plain surrounding the city, before climbing again into the hills bordering Malaga province.  This is a stunning area, not at all what you would imagine from the tourist brochures, and the views down to the coast as we emerged through a gate-like notch in the mountains way above were well worth the effort.  Unfortunately we didn´t seem to be having any luck with campsites, as the one in Vinuela, near Malaga itself, had closed for refurbishment – so we bedded down for a fairly sleepless night in the restaurant car park!  The exhaustion took it´s toll the next day, and the steep climb over the last string of mountains before the coast was especially tough…  The road on the other side of the pass descended into Malaga itself through a series of tunnels, and on several bends the road looped round beneath itself – quite disorientating!  Finally, an open campsite just outside the city provided a much-needed rest, so we stayed two nights and took the opportunity to clean and service the bikes.

The last couple of days down to Algeciras provided more stunning mountain scenery, whitewashed villages and steep hills – although yesterday, at least, they were mostly downhill!  We installed ourselves in a Pension near the harbour (the campsite, you guessed it, was closed!) and today took our leave of the bikes and caught the bus round the bay to Gibraltar, where we enjoyed English breakfast, pub lunch and ice-cream, as well as a ride in the cable-car to the top of the rock… Tomorrow, we´ll catch the ferry across to Morocco, and then….  More in the next update! 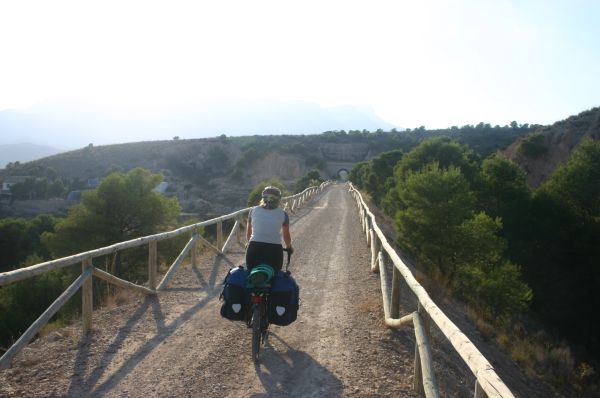 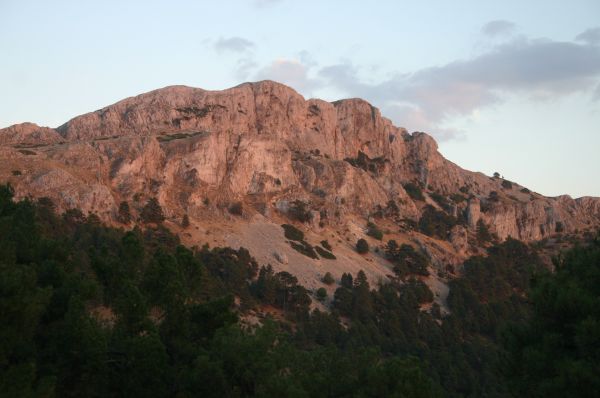 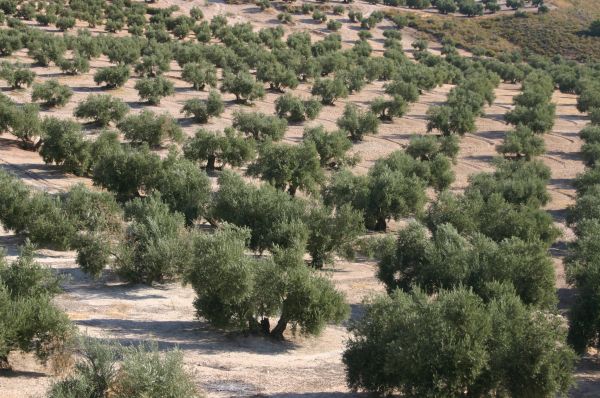 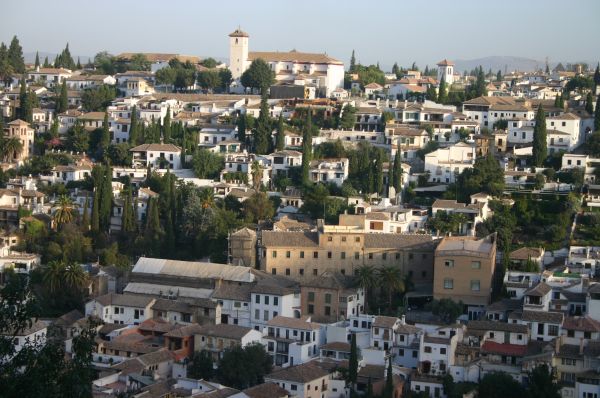