Well, the Benicarlo jeep track was certainly “interesting” as we promised!  We didn´t see many jeeps, in fact considering the proximity of the hustle and bustle of the coastal strip, replete with hundreds of people roasting themselves on the sandy beaches, it was incredibly quiet.  The track was pretty rutted and stony, with lots of loose gravel adding to the fun – our road tyres aren´t quite up to the challenge, so it was with relief that we rejoined a more “normal” road with a smoother surface after fifteen arduous kilometres!  The views from down to the coast were breath-taking, though, with the castle-topped promontory of Peñiscola visible in the midday haze, and dozens of tiny coves strung out along a beautifully turquoise expanse of water.

Later that afternoon, Luke´s bike expressed annoyance at being taken off-road by presenting a punctured back tyre.  You can´t complain too much, though, when the location for mending the “pinchazo” (useful Spanish vocab for cycle-touring) is a white sandy beach in the late afternoon sun.  We made it to a quiet camping in Alcossebre that night, where we were curious about what animals the locals kept, seeing as the pet shop prominently advertised white grapes for sale, until we realised it was the owner´s sideline!  More signs in homes advertised olive oil, honey and more grapes – all very tempting to the hungry cyclist.

The next day saw us returning to asphalt, and leaving the coast behind for a while.  This particular stretch is known as the Costa Azahar, after the abundant orange blossom that characterises the area.  Without a sea breeze, the day seemed very hot so we followed the example of a group of gossiping old men in Torreblanca, and sat under an olive tree in the town square, enjoying an extended bread and cheese lunch.  The next stretch along a major road seemed familiar, and we wondered if we were inadvertently following the route we took in 1999 when we hitch-hiked to Morocco?  No doubt a journal entry in a tatty exercise book at home would confirm if we did indeed follow the N340!  A rather exhausting search for a campsite brought us to “Camping Florida” on the sea front in Benicasim, a sprawling mass of high rise which would, in a geography text book, have warranted a caption like “excessive, unsympathetic building in the 1970s has scarred much of Spain´s once beautiful coastline”….  The campsite itself was full of interested and friendly people though, offering advice and encouragement to us on our trip in a variety of languages! The next day we left the coast behind once again, this time putting a good few hills between ourselves and the tower blocks, and cycling right through the middle of huge orange groves!  These groves later took on the appearance of a sea of emerald green, cutting a huge swathe between the coast and the mountains and comprising the huerta or irrigated zone.  Arriving in Eslida we were dismayed to find a rusty gate barred at the entrance of the campsite, but enquiries in the adjacent restaurant thankfully brought good news – not closed for winter as we had feared!  The proprietress was watching the Vuelta de España (long-distance cycle tour of Spain) onm the TV and we were soon engaged in conversation with her, picking up useful advice along the way.  Should I ever need to know the Spanish for “put a lettuce leaf under your helmet and it will keep you cool”, I´ll be ready!  We were glad to be in the quietude of the mountains again, and enjoyed a beautiful pink-gold sunset and heavy scent of jasmine in the merciful cool of evening. 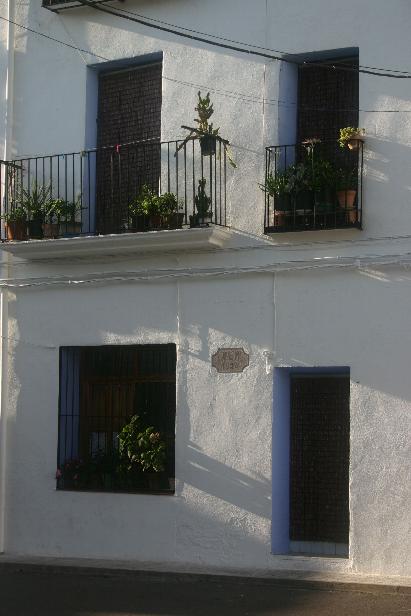 We continued upwards the next day, through a remarkably different landscape of quiet wooded valleys and tightly-packed villages of white-washed houses.  A few ruined castles were visible below us on the pineclad slopes as we climbed higher and higher through cork forest – the trunks of the cork trees ranging from a birght rust orange if recently stripped to a deep kidney-bean red.  A hovering kestrel passed overhead as we reached the summit, but was soon out of sight as we rapidly descended to the village of Almedijar, where we raided the local baker and gobbled pastries in a very unladylike fashion in the village square.  Thus fuelled, we tackled the next few hills and were glad to have enough energy to avoid the ignominy of being overtaken by a lawnmower (it was a close run thing for a while), and arrived in Segorbe around lunchtime.  We spent the rest of that day and the next in the town, the Roman Segobriga, which we found to be a very pleasant, sleepy town with some satisfyingly solid lumps of medieval tower and leafy parks with pretty fountains, tiled with locally-produced azulejos.

Our intended early departure from Segorbe was scuppered by watching a red squirrel clamber acrobatically in a pine tree for half an hour as we had breakfast, and by the very confusing road signs thereabouts!  The first town we came to was also in a post-fiesta stupor, with impromtu one-way signs, barriers, diversions and inch-deep confetti in the streets!  We negotiated a way through, however, and were soon on the Via Verde towards Torres-Torres.  The Vias Verdes are a network of old railway lines, which have been resurfaced and restored to make them suitable for walkers, cyclists and those on horseback.  They are largely traffic free and surfaced with gravel or cinder and, being old railways, manage to negotiate hills with the help of tunnels and bridges making for a flat and easy ride through hilly areas!  It was lovely while it lasted, but all over too soon as we came to the end of the Via Verde and the beginning of an 8km climb!  A well-placed water fountain provided a good place to stop for lunch and the a rather tiring afternoon brought us over yet more hills and down to Bugarra, where a horde of inquisitive children led us to our spot in the campsite.  Having established our nationality, they retired to a safe distance before chanting from 1 to 20 in English, and repeating “Hello, my name is Mariano/Susu/Carmela…” ad infinitum.

Leaving the brats of Bugarra, after a breakfast of still-warm bread and jam (the bread is really wonderful around here) we climbed steadily through pine woods, before descending again past almond orchards and an ostrich farm!  There were plenty of people harvesting carob pods into huge, flat baskets as we approached Buñol but not a tomato in sight.  We imagine they must be sick of tomatoes for 364 days of the year, however, as they see enough to last a lifetime in the annual <i<tomatina< i=””> – a fiesta which involves pelting everyone and anything with ripe or rotten tomatoes!  The streets weren´t even faintly pink, though, so they must clean up well afterwards…  We left Buñol, and seemingly civilisation, behind as we struck off into wilder, more mountainous country.  Our route that afternoon took us along dirt tracks and disused roads and involved strange and circuitous detours (a little local knowledge helpfully gleaned from a kind gentleman) on roads that seemed to be going nowhere at all!  It was all very tiring but wonderfully remote and quiet and, as we realised we would bever make it to the next campsite on the map, we chose a quiet spot on the River Xuquer and set up a wild camp.  For an unofficial campsite it was wonderfully appointed – panoramic vieews of mountains, reddish in the evening light, a private green-blue pool of water for swimming, and overhanging cliffs home to martins flitting in and out of their nests and bats, which began trickling out of their cave as dusk fell… 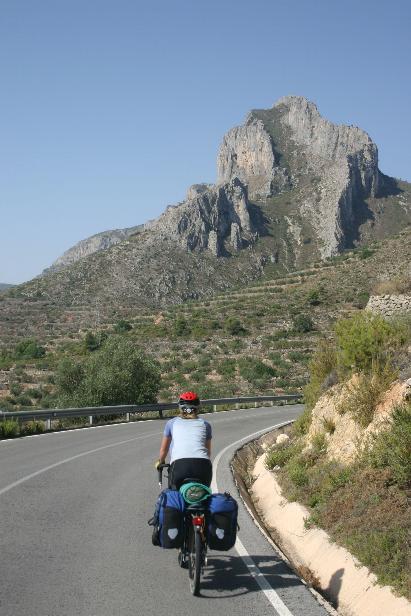 We were up and away early the next morning, eager to get going before the sun got too hot!  We stopped in a small village and followed our noses to the bakery for a much-needed breakfast and the local shop for provisions for lunch.  A large bag of olives, which turned out to be delicious, cost about the same as a bag of crisps would in the UK – we may start an import-export business to fund the trip….anyone fancy manning a stall at Borough Market?!  A further climb brought us out onto a high plateau, with scrubby, rosemary and thyme dominated vegetation and views across to green and rounded hills in the distance.  A solitary pine tree provided some shade for lunch, and it was hard not to fall asleep in the quietude – we only passed three vehicles in half a day!  Luke was worrying about the onset of heat stroke when he thought that he had seen a rabbit take to the air and fly off….closer reflection revealed it was, however, a partridge….. The heat was pretty intense, though, and we were glad to fill up with water before the final stretch along a flat plain to a town called Anna!  They obviously (!) timed their annual festival to coincide with our arrival, knowing the namesake was coming to town.  Sadly we had missed the bulls running through the streets that morning, but we witnessed the fireworks and music that evening.

Yesterday was another scorcher with the added challenge of a strong and steady headwind and so we only cycled a moderate distance from Anna, as far as Rugat and a step nearer to Finestrat, near Alicante, where we will be meeting Anna´s sister Katrina for a few days of relaxation!  We´ve had a rest day today, and tomorrow will tackle the final Sierra separating us from Finestrat.  We´ll be staying at The Orange House, located just outside the village of Finestrat, near Benidorm, which is a converted ‘Finca’ where we spent a long weekend last February.  It´s a lovely quiet place to relax or to explore the Sierra Aitana or the nearby coast… more details at www.theorangehouse.net.  Well, that´s all folks…until next time!