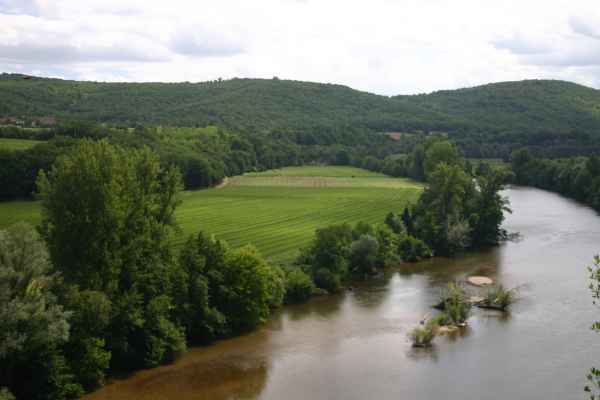 Greetings from sunny Spain!  It’s been a tough week – particularly for our leg muscles, as we’ve toiled up and over the Pyrenees, leaving the sunflowers and vineyards of southern France behind.  Our first glimpse of the looming bulk of the mountains was in Couffolens, just a few kilometers south of Carcassonne, which we left rather late last Wednesday morning after a midnight excursion around the old Cite, during which bemused tourists watched us wander round with camera and tripod.  The results were pretty good though – a couple of the photos are here, more to come in a photo gallery in the next few weeks.

We then passed through Limoux and close to Villarzel du Razes, where we spent a wine- and sun-soaked (and conisderably less strenous!) holiday last year.  The day ended with sweeping downhill stretches under a darkening sky, and we spent the night in Puivert, a small village in the pine-forested region of the Pays du Sault, overlooked by a blocky Cathar castle.  We bought an early and substantial breakfast the next morning from the village baker, who served us with hands and apron covered with flour.  Despite Luke having a twinge in his knee, we made good progress up to the first col, before descending slightly to a plain full of sheep and cows, jangling and clanking their bells as they grazed.  By now things were starting to look and feel decidedly Pyrenean as we started a gruelling 16km climb through a mossy, sheer-sided gorge where the air was thick with butterflies.  Then up through quiet villages with gargantuan log-piles – it must get very cold in winter!  A beautiful final stretch through sunny beech woodland brought us out onto the chilly summit of the Col du Pradel – at 1680m the high point of the expedition so far!

Our next stop was Ax-les-Thermes, reached by a long, fast descent down winding mountain roads.  The whole place seemed rather grey and down-at-heel; the Ariege valley, we subsequently learned, is one of the most impoverished areas of France, with ski-tourism one of its few sources of income.  We were, however, tempted by the warm waters of the towns’ spa!

After that exhausting climb on Thursday, we decided to take things a bit easier and, setting off late morning, made it up to Merens-les-Vals for lunch and then on to L’Hospitalet pres L’Andorre by tea time.  We enjoyed a mini-adventure on the way up by striking off on a footpath marked on our map, in an attempt to avoid the busy main road.  But track became grass and grass turned into rocky, muddy, root-covered path, so we were forced to rejoin the road earth-spattered and covered in vegetation… the cars did seem to give us a wider berth after that though…  L’Hospitalet is home to a railway station, a shabby hotel and The Most Expensive Grocery In The World, but thankfully also a friendly campsite.  We stayed two nights, enjoying a wonderful day off the bikes exploring the Carlit Massif on foot.  Only one valley away from the overdeveloped, dismal Ariege we walked for hours through quiet forests full of wild raspberris, harebells and lichen and across alpine meadows with creamy cows and stocky horses, watched over by wheeling swifts and raucous flocks of choughs.  As we climbed the final col of the day, two isards (pyrenean chamois) clattered across the cliffs directly above us and were just as quickly out of sight.  Goldish-red sunset had been replaced by a dark bank of rain cloud as we made it down to the campsite after dark, feet sore and tired out. 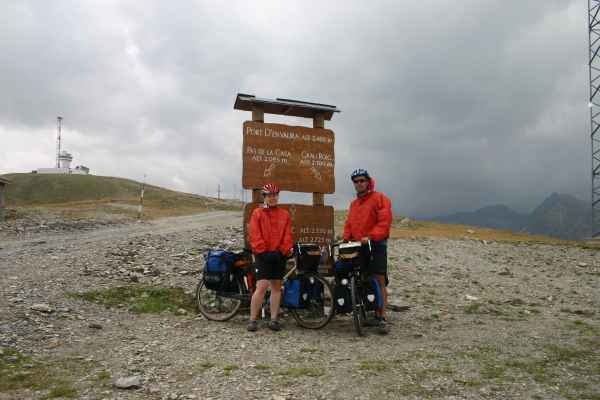 Sunday morning was chilly and misty, so we warmed up with a chocolat chaud in the World’s Most Expensive Cafe (attached to the Grocery) before beginning our ascent.  The gradient was bearable, but a lot of traffic as well as broken glass, blown-out tyres, nuts & bolts and rubbish made the road less than pleasant.  We stopped to rest and refuel in several lay-bys, as motorists hooted in encouragement, and by 11.30am we were crawling into Pas de la Casa, just across the border in Andorra.

As expected it was a monstrous combination of cheap restaurants, tacky shops and high-rise hotels, so we lingered just long enough for a picnic lunch, before continuing up the steepening hairpins towards Port d’En Valira.  The last few kilometers were tough, Anna feeling less than 100%, but before too long the top was in sight, and after one last hairpin we were stopping for a quick photo at 2408m.  Rain clouds gathered as we left the rather drab col, and within a few minutes we were glad of our waterproofs and Cycleflex gloves as the heavens opened.  After 18km and over 1000m of climbing, though, the rain did little to spoil our enjoyment of the descent, as we raced cars down the valley to Canillo.  By the time we’d reached Camping Santa Creu, just by the river, the sun had reasserted itself and we soaked up the rays while pitching the tent, before going off into the vilage for a celebratory burger and beer…

Monday and Tuesday were spent resting up in Canillo, making the most of the sauna and swimming pool in the nearby leisure centre, and spending a day with Luke’s parents, now on their way home after three weeks in sunny Mallorca.  A nice evening meal in a local restaurant provided an opportunity to try to get to grips with Catalan, the Andorran national language – surprisingly different to both French and Spanish.  For example, the word “tancat” despite conjuring up images of sunbathing felines, actually means “closed” – “fermé” in French and “cerrado” in Spanish.  The English translations on the menu did little to help, including as they did such specialities as “net of pigs” and “gutters of the house”!  This morning brought another round of goodbyes, as Luke’s parents, along with Nathan and Jen, set off on the long drive home to Wales.  Shortly after midday we left Canillo in glorious sunshine, for a rather unpleasant 35km descent to La Seu d’Urgell, across the border in Spain.  The roads were extremely busy with reckless car drivers, lorries and caravans, and about the best thing to say about the day’s ride is that we averaged our highest speed yet – 21kph – and covered the distance in a little over 2 hours including stops.