An impressive crowd of friends and family had gathered at the Observatory on a scorching morning to see us off on our adventure.  It was a bit of a whirlwind of goodbyes and it was just as well Luke’s little cousin, Piera, was on hand to help organise the raffle, which yielded some surprising results.  Cycling away through Blackheath it finally hit us just exactly what we were undertaking, and the fact that we had finally set off and really said our goodbyes began to sink in.  As a result the first few miles were somewhat tear-filled – never a good idea in busy London traffic!  We zoomed on in the hot sun, keen to get clear of the busy roads as soon as possible and encountered our first bit of gravelly, uneven terrain rather sooner than expected – in Bexleyheath Park, though it felt pretty Saharan!  So, by just after teatime we were standing on a bridge above the M25, saying farewell to London once and for all, before heading on for a campsite in Lingfield.  We fell gratefully into our sleeping bags, exhausted after the weekend’s events.

Monday saw us up bright and early(ish) and heading south through pretty little villages with evocative names like Warninglid and Cowfold.  Plenty of cows, combine harvesters and caravans made for a few interesting encounters on narrow lanes, and I swear there are more Ups than Downs in the North Downs…  It was rather a long day in the end, and by the time we sighted the sea and made our way onto Hayling Island, the sun had set and our legs had pretty much given up having pedalled 110km that day.

An unwelcome alarm clock sounded at 7 the next morning, and we packed up and cycled the few miles to the terminal of the Hayling Island to Portsmouth ferry.  We had 40 minutes to kill before the crossing and so plenty of time to make the acquaintance of Mike, the ferryman.  Fortuitously, he was himelf a keen cyclist and regaled us with tales of previous trips he had made as well as insisting on waiving the cost of our tickets – thanks Mike!  In fact, by the time we set sail, the ferry was full of cyclists and we were beginning to feel like local celebrities as Mike announced our trip to anyone and everyone that clambered aboard!  The ride to the cross Channel ferry port was a little less relaxing, given the morning traffic on the main roads, and the ramp up onto the “Pride of Cherbourg” was definitely the steepest hill yet (maybe we will need those lowest gears after all).  By 11am, our bikes were safely lashed down and we were up on deck watching the British coastline recede into the hazy distance.  Then we promptly fell asleep in the bar (due to comfy chairs and tiredness not alcoholic overindulgence you understand)… 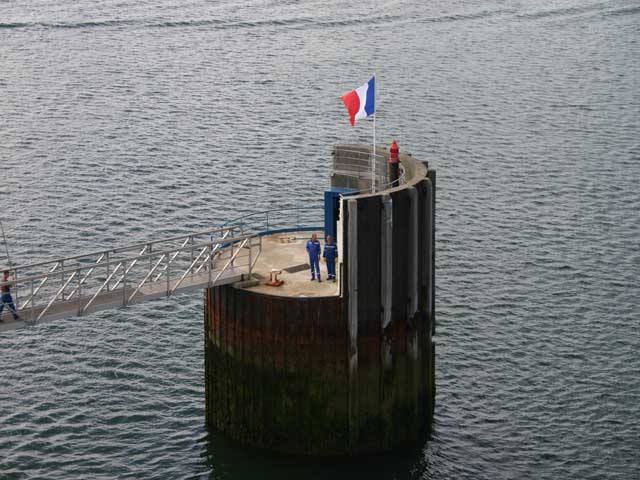 Bonjour La France!  We jostled our way out of the ferry port at Cherbourg with all the other holidaymakers, and climbed five miles up to the nearest campsite, only to be met with “Camping Complet”!  Thankfully the gardien took pity and fitted us in to a spot not normally used for camping.  We were still getting used to the panniers – finding a mug in one and a spoon in the other etc… I’m sure we’ll get more organised with practice!

A bit of a lie-in on Tuesday morning, and by the time we had packed and taken down the tent it was after midday!  We took the coast road west in a cooling sea fret and spent a little while working out exactly where we were – lots of new roundabouts having been built since the creation of the map, and having just followed signs for “Camping” from the ferry the previous day.

Pretty difficult first few hills given the large breakfast, midday heat and apparent ability of the panniers to get heavier and heavier as the gradient increases.  A lady walking down the first major hill said (not for the last time I suspect) “elle est dure” about the particular colline in question.  The gradient eased a little as we travelled inland, passing fields full of ripe corn, brown cows and hedgerows in bloom, before a long shallow descent into Le Theil. Fuelled on by chocolate brioche, we cycled on through very pretty/twee hamlets with abundant geraniums and quiet chuckling streams, watched by an inquisitive (hungry?) sandy-eared donkey.

Gently up and down to Valognes, where we bought bread, cheese and tomatoes (no wine, boo), pulling off the main road five miles later to lunch in Urville – a tiny village (with a HUGE church) full of beautiful rose madder coloured hydrangeas and garish fuchsias.

In a small town called Pont de l’Abbé, with bunting left over from Bastille Day and swallows dipping and swooping among the fresian cows, we saw a sign for “Camping” and decided to call it a day.

St. Jores, Périers, St. Aubin and Camprond the first villages of the day and then onwards upwards on small lanes to Cerisy, where we were trapped by a drunk while resting on a bench (thought at first our comprehension of French had just deteriorated badly!)  Then on through lush pastures to Notre Dame de Cenilly, and Maupertuis, while the terrain gradually got hillier and hillier.  We joined the main road in Percy for a tiring last 9km into Villedieu les Poêles, where we just had to stop.  Anywhere called “Town of God of the Frying Pans” has to be worth an overnight stay, doesn’t it? 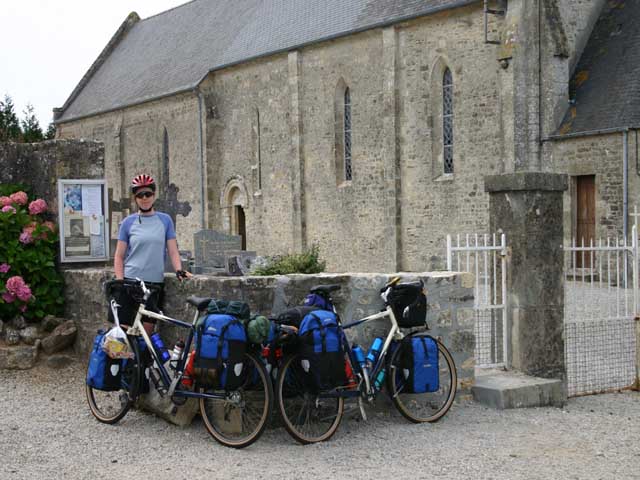