Mount Kenya – The Sirimon-Chogoria Traverse (including a circuit of the main peaks).

We decided to combine the Sirimon and Chogoria routes to do this traverse as both are less well-used than the Naro Moru route, and have reputations for great scenery and wildlife.  We didn’t see many animals (the odd antelope and loads of birds) but the scenery, particularly on the descent via the Chogoria route, is stunning. 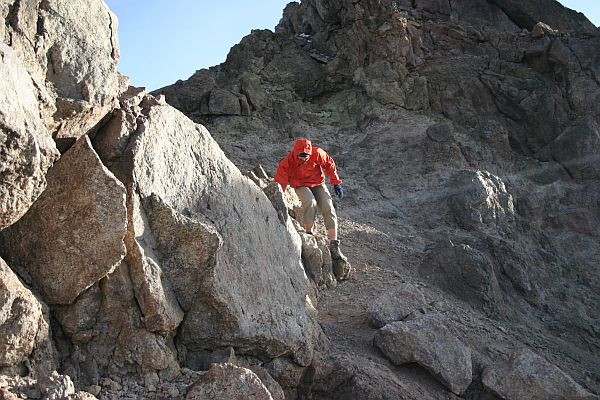 Preparations.
The Sirimon route starts from a tiny hamlet on the north-western side of the mountain called (no surprises here) Sirimon.  It’s about 15km north-east of Nanyuki, where there are decent hotels (the Nanyuki River Lodge is recommended), supermarkets where you can stock up for the climb, and places to hire gear.  You can also hire a guide and porters here if you decide to do it this way.  There is virtually nothing in Sirimon itself.

We decided to go it alone as we wanted some peace and quiet on the mountain, and to save money.  We left most of our excess gear at the Nanyuki River Lodge, and hired boots, rucksacks, overtrousers, hats & gloves thee.  (About GBP30/Ksh4000 for the two of us for 5 days).

The route ascends through fields and villages from Sirimon village (2150m) and enters the forest shortly before reaching the park gate (2500m) where you pay your fees.  You then continue through the forest, emerging just as you reach the Old Moses hut/campsite at 3150m.  From there, you have a choice of two routes to Shipton’s Camp at 4250m, below the peaks: the first follows the main valley and is a fairly gentle, 5-hour climb; the second (which we opted for) goes up and down over several other ridges, north of the main route on a sometimes indistinct path via Liki North hut, before dropping into the main valley to join the main route.  You could break this into two days and camp at Liki North campsite (4000m – or sleep in the hut).  The ascent from Shipton’s to Point Lenana takes about 3 hours, so you could then descend easily to Minto Hut on the Chogoria route the same day.  Alternatively, you can follow a stunning path (the Summit Circuit Path0 which eventually takes you back, all the way around the main peaks, to Shipton’s.  Having left at 3.30am we got back around 2.30pm so this is a big day – you cross several 4500m+ cols and there are a lot of steep ups and downs, and a lot of scree in places.  Again, you can split this into two days by camping en-route at Two Tarn campsite, but then you have to carry all your gear rather than leaving most of it at Shipton’s and travelling light.

If you do the circuit, you’ll then ascend Simba Col (4620m) before dropping down to Hall Tarns and the Minto Hut (4300m).  Either way, you then follow a well-defined route down a ridge overlooking a huge valley with awesome views of the mountain behind you.  A night at the Mount Kenya Bandas at the Chogoria Gate (3000m) is a well-earned bit of luxury before a long (30km) walk down through thick forest to Chogoria village (1500m) where it’s all over.

We planned a five-day route, which would mean four nights on the mountain (Old Moses, two nights at Shipton’s, then the Chogoria Bandas). 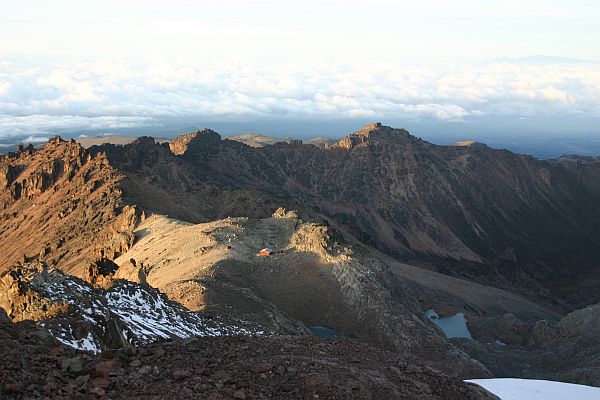 We could easily have extended this to another day, but didn’t fancy carrying any more food!  It would be well worth spending an extra day on the way up, though, if you’re not already acclimatised – we’d been trekking in the Bale Mountains in Ethiopia (over 4000m) a couple of weeks previously so thought we should be OK.  You could also cut a day off this route by not doing the circuit of the peaks – but you’ll be missing out on the best bit!  If you were seriously fit and well-acclimatised, you could probably do the route in 4 days (3 nights) including the circuit, by using transport to/from the Park Gates (see below).  We were glad to have walked the whole way though, especially on the way up as it’s a useful way of getting into your stride and also a really pleasant walk.  If you have time, and especially if you’re not acclimatised, I’d take 6 or 7 days.

We caught a matatu (minibus) from Nanyuki to Sirimon village, which cost Ksh50 each.  It’s then a 9-km walk to the Park gate.  You can charter a matatu in Nanyuki to take you all the way there, which might cost about Ksh1000.  Similarly, we used public transport from Chogoria village on the way back – you could get transport (4WD only) from the gate all the way down (although it costs more on this side than on the Sirimon side).

On the mountain, there are decent huts at Old Moses and Shipton’s camps, and comfortable bandas at the Chogoria Gate.  There are also very basic huts at Liki North and Hall Tarns (Minto’s Hut).  So you could do the whole route without using a tent, thus saving weight.  We decided to take a tent as a safety measure in case we didn’t reach a hut, and to give us more flexibility.  You can either pay KWS for camping at the gate, or pay to camp near the huts (which is cheaper – see below).

Try the Universal Currency Converter if you need to know what a Kenyan Shilling is worth now. 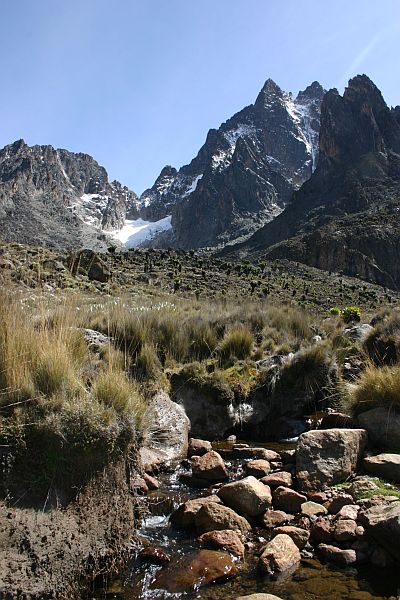 The whole mountain is a National Park, which foreigners pay US$15 per person per day to enter.  The last day (walking down through the forest to Chogoria) is outside the park, so we paid for 4 days.  You can also pay US$8 per person per night to camp (I think this allows you to camp anywhere inside the park) which we did, for three nights.  So we paid US$168 for two people to KWS.  Staying in the huts actually costs slightly less than this, and camping nearby costs less again, so that’s what we would do next time – you don’t have to pay KWS anything for this.  We stayed at the Chogoria Mt. Kenya Bandas for the last night, which is expensive at Ksh1200pp but well worth it (hot showers, fireplaces in the rooms…).

Gear hire cost us Ksh4000 for two, and transport about KSh300pp in total.

There’s a fair bit of information in the Rough Guide to Kenya but if you want a specific guidebook try Lonely Planet’s Trekking in East Africa.

The best map we could find is by Savage Wilderness Safaris, available in Nairobi and Nanyuki for around Ksh700.